In our last blog (Blog 49), we highlighted Edward Page Terhune, who delivered oil throughout the Montgomery Township area with a team of horses and a tank wagon in the early 1900s. In this blog, we will highlight the lives of the Hoaglands who contributed significantly to the quality of life in Blawenburg. Myrtle Hoagland was Edward’s daughter. This blog would not have been possible without the help of Myrtle and Norman Hoagland’s daughter, Judith Hoagland Adams.

Edward Page Terhune holds Judy Hoagland in his lap circa 1949. Note the early television on the card table to the right.

Edward and his wife, Estelle Davis Terhune, had two children, Walter Edward and Myrtle Davis Terhune. Both Walter and Myrtle Terhune carried family names as middle names, a common practice at the time. Walter married, and he and his wife, Mazie, lived in the house south of the post office that was once owned by long-serving postmaster, John N. Van Zandt. This house has been owned by Steve Boynton since the 1970s. Walter and Mazie had no children. Walter worked for Van Zandt’s farm equipment business for 21 years until 1950, when he and Mazie moved to Beaufort, South Carolina to begin an International Harvester farm equipment business.

Judy Adams remembers that Mazie passed away at about the same time as the Kennedy assassination in 1963. In 1970, Walter married Laura Nell Sikes (1912 – 2004). “Nell was from Claxton, Georgia, the home of the famous fruit cakes,” Judy recalled. “When they were married, Nell and Walter still lived in Beaufort, South Carolina. They were married many years, and I remember her southern accent and her sweet, kind nature.”

Myrtle Terhune married Norman Hoagland, and Judy was their only child. They lived in Blawenburg, just east of Blawenburg Church, where they were active members. Norman had a workshop behind the house to ply his sign painting and furniture-making skills.

This picture was taken shortly before Norman went overseas in World War II.

Judy said that her family was linked to other Terhune families living in Blawenburg. “My mother was the first cousin of Bill Terhune, Ed Terhune, Doug Terhune, and Francis Conover.… She (Myrtle) attended the Blawenburg School through the eighth grade, and then went on the train every day to Bound Brook High School, where she was graduated.”

Edward Terhune and his family enjoy the boardwalk at the Jersey shore in the 1930s. At that time, it was the custom for people to wear their “dress clothes” when they walked on the boardwalk. L-R Edward Page Terhune, Estelle Davis Terhune, Mazie Terhune, Walter Terhune (behind her), Myrtle Terhune Hoagland, and Norman Hoagland

Norman was in the Army in World War II and spent 2 ½ years in Europe, returning in 1946. Judy recalled, “I do not know a lot of details about my father’s experiences during the war, because like so many of that generation of veterans, he did not talk about the war at all until shortly before he died.”

“He was in the Battle of the Bulge with General Patton, and all that I know is that he was in heavy artillery and was deaf in one ear because of it. He also would not go see fireworks at the Princeton Stadium on the Fourth of July because it reminded him too much of the sounds of war.” He told Judy that late in the war that “he was with a group who liberated a concentration camp, and …you could smell it from miles away.”

Norm Hoagland was a driver for an officer in Belgium during WWII.

Hoagie, as Norman was called, always had an interest in and talent for art. This ultimately led to a career. He was also athletic. While in high school, he became an All-State center in football. He was awarded a partial scholarship to Brown University, but the Depression was in full swing and he couldn’t afford the tuition. Instead, he took a job as a window display designer at Wannamaker’s Department Store in Philadelphia. “He traveled there every day on the railroad, which he boarded in Hopewell, where he still lived with his parents,” Judy said. “Eventually, he started a wallpapering business, and then a sign painting and lettering business.”

This gold-leaf painting by Norman hangs in Cook Hall at Blawenburg Church.

Sign painting became Norman’s primary career. Business was good, and he hired a distant relative of Myrtle’s, Don Terhune, to help build the signs. His shop was right behind his house on Route 518. As he grew older, “he applied for a job at RCA Labs in Princeton and became the supervisor of the paint shop there. It was a research center that had many government contracts. He was involved in a variety of projects, such as developing paint for the various machines used in travels into space, the building and staining of presidential lecterns, etc.”

Judy remembers her father’s passion for art. “In addition to his long days in his sign shop or at RCA, my father also did acrylic and oil painting. He built many pieces of beautiful furniture, inlaid jewelry boxes, and gold leaf paintings. He refinished, refurbished and rebuilt many antiques he purchased at local sales. 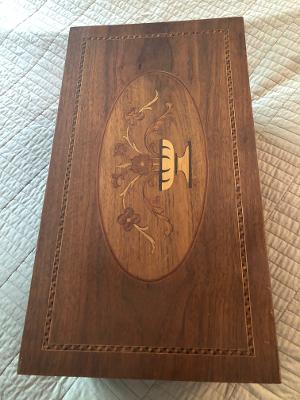 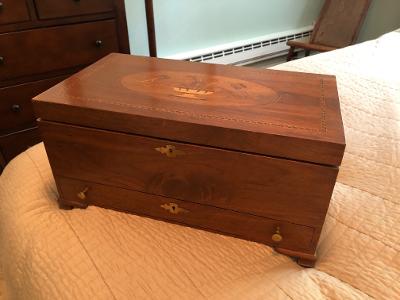 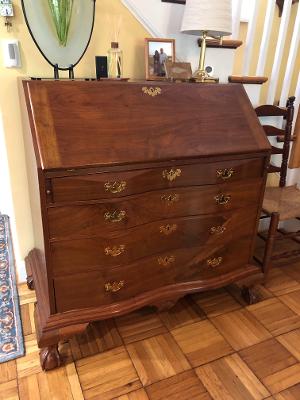 Click the arrows in the pictures to see four pieces of furniture Norman made.

Not surprisingly, Judy inherited an interest and aptitude from her father. She became an art teacher and taught for 36 years at German Central School in Hudson City, New York.

Myrtle was a talented, organized person. She held many positions over the years that kept things organized. Judy remembers her mother’s busy life. “My mom always did the books for my dad‘s business, and she was eventually elected to the position of Montgomery Township Tax Collector, which she did for many, many years. The business was in our home, and I can remember many interrupted meals with people paying their tax bill, or the phone ringing for someone to talk to my Dad about current issues with the local schools. My mom eventually gave up the Tax Collector position and worked for Merritt Insurance Agency in Rocky Hill for many years. She was also the Treasurer for the church Sunday school for many, many decades. She was also a member of the Eastern Star.”

Myrtle was in charge of the Student Aid Fund at Blawenburg Church. This fund provided interest-free loans to people who wanted to further their education after high school. She passed the leadership of this committee to my wife, Evelyn, in the 1970s.

Norman was also the supervisor when Blawenburg Church built the Christian Education Building, now known as Cook Hall, behind the church in 1959-60.

In their final years after living in the Blawenburg area all their lives, the Hoaglands moved to Crestwood Village in Whiting, near Toms River. In 1988, Hoagie passed away, and then just a year later Myrtle also passed away.

The Hoaglands were talented and used their gifts well. Hoagie brought joy to many through his incredible art works, and Myrtle kept many people and organizations on track with her organizational skills. They surely made a difference during their time on Earth.

1. The Hoagland house is still an art center in Blawenburg. Joseph Petrovics, the renowned sculptor of the Firefighter’s Memorial Wall in New York City, has lived in the house for many years. The bronze bas-relief sculpture, which is 6’3” high by 56’ long, is an amazing effort that was created by Joseph between 2003 and 2006. It is installed at Firehouse 10 near the site of the World Trade Center. We will report more on Joseph Petrovics and his work in a future blog.

A section of the Firefighter's Memorial Wall

2. Norman’s sketch of Blawenburg Church has been widely used for many years. It appeared on the cover of the Sunday Worship Service bulletin for decades. The original was lost over time and copies were “mimeographed” so much that they became darker and darker. A copy from the 1980s appears below. Note his name, N. E. Hoagland, at the end of the center sidewalk.

The cover picture used on the Blawenburg Church bulletin for many years.

48 Blaws Come to the New World